It features three unique services that can be used independently : The integration of these three services on CoScience creates a bigger picture that is detailed here and here.

CoScience understands science as an individual and collective ethics with the aim of building up reliable knowledge on the topics it studies.
The scientific process pursued by CoScience is in line with the following principles: 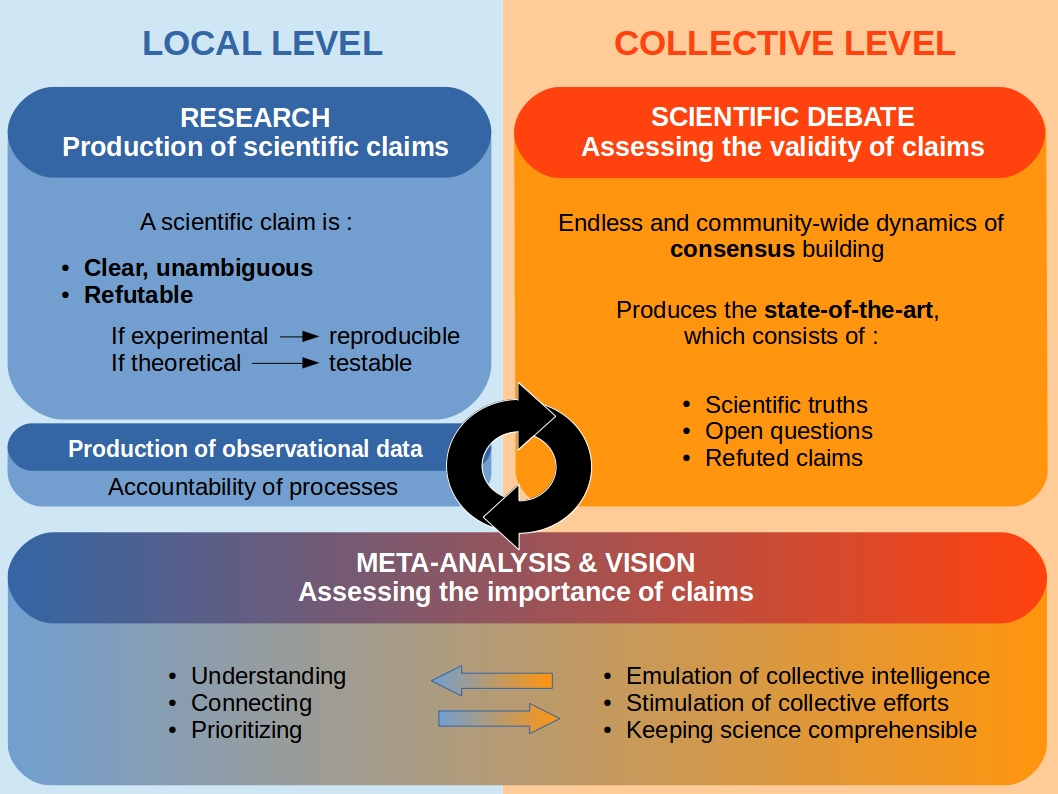 Collective intelligence is naturally built up through scientific debate and by sharing viewpoints. CoScience implements both of these within an appropriate, modern framework.

Moreover, since both rely on participation, the underlying question of how to organize science must be addressed explicitly. How can scholars efficiently find all materials of interest to them? CoScience has created the ‘Map of Science’, a dynamic thesaurus also powered by collective intelligence that provides a new way of exploring science.

Scientific debate. CoScience offers a unique platform for scientific debate as an endless conference on a scientific communication (e.g. an article), with the aim of building a community-wide consensus on its validity.

CoScience features a fully-automated upload process that makes scientific communication interactive. Forums are locally embedded so that authenticated scientists can properly challenge and discuss each of its assertions in as much detail and depth as necessary, as equals, until a consensus is found.

In this approach, a scientific proposal does not only consist of the author’s original intent, but also includes the debate that validates it, which is inseparable. There is no final decision to be made (akin to acceptance/rejection in a journal). In this context, the relationship between authors and their critics can be positive and collective intelligence is made possible. A bona fide, reasoned controversy is certainly highly interesting for peers, will generate more visibility for the communication, and the authors, reviewers and many more will want to participate.

Scientific debate is not to be confused with standard peer review, which is more like a trial. Peer review has a different goal (selection), timeline, attendance and a power relationship between participants that deters disagreement. The output should not be the same.

Meta-analysis & vision. CoScience allows scholars to communicate their understanding and vision of science via the so-called ‘self-journal’ tool. Scholars can use a ‘self-journal’ to curate scientific items in order to create meaningful topical collections with a title, an editorial that highlights their point of view and specific annotations on each item.

An ecosystem of self-journals is a treasure trove of ‘easier-to-access’ meta-analyses of the literature that substantiates all viewpoints present in the community. This gives rise to a highly qualitative collective vision, primarily through the specific scientific items curated the most by the community.

Organizing, monitoring and browsing science. CoScience has implemented ‘the Map of Science’, an interactive thesaurus. It is intended to include all scientific keywords and to logically interconnect them via two types of links: a ‘narrower concept’ link (e.g. Physics → Quantum physics) and a ‘related concept’ link (e.g. ‘Virus disassembly’ in biology and ‘Percolation theory’ in physics) that embodies bridges between historically separated fields.

The Map of Science grows through the consensual addition of keywords and links by scholars. Authors can then accurately label their communications using this consensual vocabulary. In turn, readers can enjoy unambiguous and exhaustive access to all available materials on topics of interest to them.

Science becomes browsable and interdisciplinary connections are highlighted. This object has new and valuable applications in how we perceive scientific activity.

Scientific governance. Scientific content is openly and collectively governed by CoScience users, who have complete autonomy to assess the validity of scientific communications through debate, assess their importance through self-journals, and organize science through the Map of Science.

There is no gatekeeping process on CoScience and scholars can share whatever they consider fit for scientific debate as long as they sign it.

Although ideally no content should be taken down, this type of mechanism is required by law. Therefore, after fraudulent content has been flagged, it will be removed by the webmasters of CoScience (e.g. content uploaded by anyone other than its legal owner, pornographic images). This is the only aspect of scientific governance which is not in the hands of CoScience users.

Technical governance. The precise model of collective technical governance has yet to be decided. The model is debated and discussed within the association ‘Science Collective’, whose membership is open to all (including you). The goal is to design an efficient development and decision-making model that would ensure that CoScience can always evolve and adapt to the multiple needs of the community in reasonable time. So far, the keywords are ‘open source’, ‘democracy’ and ‘blockchain’. Any scholars interested are more than welcome to join Science Collective, take part in this important conversation and collectively exert technical control over CoScience.

On an abstract note, CoScience is unique in giving scholars back the autonomy (and responsibility) for operating in the three dimensions of science: research, debate and vision. When put to good use (as incentivized by CoScience), this gives scholars the power to guide science how they wish, the freedom to fully express their value and receive recognition as experts regardless of their position. We consider this to be objectively in the interest of the vast majority of scholars. It constitutes a long-term reason as to why they may wish to start sharing their value on CoScience and help make it an academic standard.

On a more practical note, CoScience does not interfere with the current publishing system and can be used in parallel. Users remain the owners of any content they share and can therefore freely enjoy the benefits of CoScience as researchers, reviewers and academic leaders while still playing the frenzied game of publish-or-perish.

As a researcher, CoScience gives you the freedom to share any scientific communication you are prepared to defend in an open scientific debate. The only condition is that you sign in with your real name (your reviewers will do the same).

In particular, there are no restrictions regarding the topics, the type of results (e.g. there can be negative results) and the format (e.g. not necessarily an IMRaD article). Your communication will be debated by the community for the purposes of science, free from the considerations associated with final acceptance/rejection that inhibit discussion in the context of a journal. Beyond the inherent scientific relevance of debate, there is genuine pleasure to be found in it, both for the author and for the reviewer. Moreover, it will provide you with helpful feedback that may improve your chances of later passing the peer review of a journal (if you share a pre-print).

As a reviewer, you can freely debate and discuss materials that have been uploaded onto CoScience, without the need of pre-approval by a scientific authority. The only condition is that you sign in with your real name.

Beyond the obvious scientific benefits of debate, engaging in relevant discussion is a golden means of self-promotion. First, regardless of your position, every article in your field is a playground for public exposure and thereby recognition as an expert. Second, it is a great networking opportunity. It is a pleasure and also inherently useful for authors to receive relevant and reasoned feedback, even in critical form. Openly providing feedback builds a good connection with the authors, based on skills and competences, which may prove useful later, at the very least when you upload something yourself, but also in other aspects of the real-world competition in academia.

As a leader, you can use your self-journal to communicate and substantiate your understanding of the topics of your choice and to influence their development.

A reasoned self-journal is highly beneficial to its readers as an ‘easier-access’ expert guide to make sense of the complexity of scientific production. The current system does not really meet this demand sufficiently. In return, your self-journal is yet another means to receive recognition as an expert and a leader, and is an appropriate channel for self-promotion and visibility.

A virtuous economy of knowledge. First, we want to stress the idea that mass adoption of CoScience has the unique and highly desirable potential of steering the economy of knowledge back onto the right path in the long-term and escaping the ‘publish-or-perish’ era once and for all. This idea is developed at length in this article that you are welcome to debate.

In the current system of rewards based on publication in high impact factor journals, journal editors are the actual creators of scientific value. Moreover, the most rewarding publication slots are rare, meaning that scientists have to artificially turn against each other to gain access to them. This competition impedes collective intelligence, since peers are also competitors, which is detrimental to science.

In CoScience, a good article is one stated as such by scholars, meaning that scholars are the actual creators of value. In CoScience, assigning value to a scientific item (i.e. stating that you think it is valid or important) does not deprive any other item of the value it deserves. Moreover, relationships between scholars are mutual since everybody is both an author and a reviewer. The optimal individual strategy to stand out in this environment is ‘do to others what you would have them do to you’. To get maximum personal recognition, the ideal strategy is to care and give others the recognition they deserve. In CoScience, the most rewarding acts are those performed in a spirit of service to the community. This makes CoScience a pleasant place for scholars and scientific quality can reach new heights.

Costs. In CoScience, science is at its best when scholars manage everything themselves without intermediaries. CoScience’s operational costs therefore consist solely of maintenance and storage, estimated at less than $1 per item. In other words, assessing the validity and the importance of a scientific article on CoScience (arguably its most critical features) costs 3000+ times less than assessing its impact within the current system.

Multidimensional evaluation. On CoScience, reviewing and sharing a vision, two essential scientific activities, become accountable. Moreover, these activities are without cost, contrary to research. This means that embracing the diversity of the new and sound scientific indicators provided by CoScience (a good thing per se) is also in the interest of the majority of scientific institutions. It enables them to level the playing field in terms of recognition on par with those that tend to attract most of the funding today end enjoy a considerable advantage for research.

Management of scholars. The evaluation of scientific activity is often a source of conflict and bitterness for scholars against their institution. Performing this evaluation collectively by the community is not only sound and legitimate, it also opens the door to more positive management of scholars (which has yet to be invented), with internal benefits.

Rebuilding credibility. CoScience goes further and opens a way for science to fully get back its voice in society as an unbiased reference for facts and reason. CoScience acts as a long-term fix for many problems which have gradually undermined science in the eyes of the public, to the point that a scientific argument may be seen as nothing more than an authority argument.
A direct link with society. Moreover, with self-journals, scholars can do their own scientific journalism and popularization. The insufficient qualifications of journalists sometimes convey misleading reports of the body of literature. A reader-friendly self-journal covering a hot topic can be a raw source of information for the layman, who would also appreciate getting their information directly from a scholar. Reasonably complex scientific views can then be substantiated and directly disseminated to the general public. This direct link could also provide recognition and benefits for the scholars who take time to do it properly.