Priority
Who?
1 Prioritize
All critiques & comments

This article has reached scientific standards

Version 1 Released on 26 May 2015 under Creative Commons Attribution 4.0 International License

To study the critical Casimir force between chemically structured boundaries immersed in a binary mixture at its demixing transition, we consider a strip of Ising spins subject to alternating fixed spin boundary conditions. The system exhibits a boundary induced phase transition as function of the relative amount of up and down boundary spins. This transition is associated with a sign change of the asymptotic force and a diverging correlation length that sets the scale for the crossover between different universal force amplitudes. Using conformal field theory and a mapping to Majorana fermions, we obtain the universal scaling function of this crossover, and the force at short distances.

Fluctuation-induced forces are generic to all situations where fluctuations of a medium or field are confined by boundaries. Examples include QED Casimir forces [1,2], van der Walls forces [3], and thermal Casimir forces in soft matter which are most pronounced near a critical point where correlation lengths are large [4,5]. The interaction is then referred to as critical Casimir force (CCF). Analogies and differences between these variants of the common underlying effect have been reviewed in Ref. [6].

Experimentally, CCFs can be observed indirectly in wetting films of critical fluids [7], as has been demonstrated close to the superfluid transition of ${}^4$He [8] and binary liquid mixtures [9]. More recently, the CCF between colloidal particles and a planar substrate has been measured directly in a critical binary liquid mixture [10,11]. Motivated by the possibility that the lipid mixtures composing biological membranes are poised at criticality [12,13], it has been also proposed that inhomogeneities on such membranes are subject to a CCF [14] which provides an example of a 2D realisation.

The amplitude of the CCF is in general a universal scaling function that is determined by the universality classes of the fluctuating medium [15]. It depends on macroscopic properties such as the surface distance, shape and boundary conditions of the surfaces but is independent of microscopic details of the system [5]. Controlling the sign of fluctuation forces (attractive or repulsive) is important to a myriad of applications in design and manipulation of micron scale devices. While for QED Casimir forces a generalized Earnshaw's theorem rules out the possibility of stable levitation (and consequently force reversals) in most cases [16], the sign of the CCF depends on the boundary conditions at the confinement. For classical binary mixtures, surfaces have a preference for one of the two components, corresponding to fixed spin boundary conditions ($+$ or $-$) in the corresponding Ising universality class. Depending on whether the conditions are like ($++$ or $--$) or unlike ($+-$ or $-+$) on two surfaces, the CCF between them is attractive or repulsive. So-called ordinary or free spin boundary conditions are difficult to realize experimentally but can emerge due to renormalization of inhomogeneous conditions as we shall show below [17]. Motivated by their potential relevance to nano-scale devices, fluctuation forces in the presence of geometrically or chemically structured surfaces have been at the focus recently. Sign changes of CCFs due to wedge like surface structures have been reported very recently [18]. Competing boundary conditions can give rise to interesting crossover effects with respect to strength and even sign of the forces. Here we consider such a situation for the Ising universality class in 2D. At criticality, this system can be described by conformal field theory (CFT) [19,20], and CCFs are related to the central charge of the CFT [21–23], and scaling dimensions of boundary operators [24].

Figure 1 Figure 1. Ising strip of width $L$ with alternating fixed spin boundary conditions on one side, with a typical spin configuation indicated by the shading.
In this Letter, we show that boundary conditions which alternate periodically between two spin states (see Fig. 1) give rise to a novel phase transition. Associated with that is a diverging correlation length that sets the scale for a sign change of the CCF on one side of the transition. We obtain the critical exponents and exact expressions for the universal scaling function of the force in the critical region. Consider the Ising model on an infinitely long strip of width $L$, and assume that the system is at its critical temperature $T_c$ so that it is conformally invariant. For homogenous, fixed spin boundary conditions $\gamma_1$, $\gamma_2 = \pm$ on the two boundaries, the critical Casimir energy per unit strip length, ${\cal F}$, is determined by CFT. Since $L$ is the only finite length scale, the energy obeys a simple power law. The amplitude is determined only by the central charge $c=1/2$ of the Ising model and the scaling dimension $h_{\gamma_1 \gamma_2}$ of the so-called boundary condition changing (BCC) operator from $\gamma_1$ to $\gamma_2$ (see below for details on the BCC operator) [24], \begin{equation} \label{eq:1} {\cal F} = - \pi \left( \frac{1}{48} - h_{\gamma_1 \gamma_2} \right) \frac{1}{L} \end{equation} where we measure here and the following energies in units of $k_B T_c$. For like boundary conditions $\gamma_1=\gamma_2 = +$ or $-$ one has $h_{++}=h_{--} = 0$ and hence an attractive force $F = - d {\cal F}/dL$. For unlike boundary conditions $\gamma_1 \neq \gamma_2$ one gets $h_{+-}=h_{-+}=1/2$ and hence a repulsive force. There is one more conformally invariant boundary condition that corresponds to free (f) spins or ordinary boundary conditions. When combined with fixed boundary conditions, the corresponding BCC operator has the scaling dimension $h_{f+}=h_{f-}=1/16$ which implies a repulsive interaction in Eq. (\ref{eq:1}). In the following we consider a strip with homogeneous $+$ spins on one boundary and alternating regions of $-$ and $+$ spins of length $a$ and $b$, respectively, on the other boundary, see Fig. 1.

If the temperature is slightly different from $T_c$, the system is in the critical region, where the free energy density can be decomposed into non-singular (${\cal F}_{ns}$) and singular (${\cal F}_{s}$) contributions, \begin{equation} \label{eq:2} {\cal F}(t,L,\tau) = {\cal F}_{ns}(t,L,\tau)+ {\cal F}_s(t,L,\tau) \end{equation} that depend on the reduced temperature $t=T/T_c-1$, the width $L$, and a scaling variable $\tau=a/b-1$ that is specific to the alternating boundary conditions in Fig. 1. While the non-singular part is an analytic function of $t$ and $\tau$, the singular part is not. For homogeneous boundary conditions, $t$ is the only relevant scaling variable, and in the critical region the singular part of the free energy density is given by a universal scaling function $\vartheta$ that depends only on $L/\xi$ [15,5] where $\xi(t\to 0^\pm) = \xi_0^\pm |t|^{-\nu}$ is the bulk correlation length with amplitude $\xi_0^\pm$ and exponent $\nu=1$ for the Ising model. As we shall see below, the same renormalization-group (RG) concepts apply to a novel, boundary induced critical region that we identify for inhomogeneous boundary conditions around $a=b$. To focus on that region, we assume in the following that the system is at its bulk critical point, $t=0$. For large $L \gg a,b$ the singular part of the free energy density can be expressed in terms of a universal scaling function of the new correlation length $\xi_c(\tau)=(a+b)|\tau|^{-\nu_c}$, \begin{equation} \label{eq:3} {\cal F}_s(0,L,\tau) = \frac{1}{L} \vartheta[L/\xi_c(\tau)] \, . \end{equation} Below we shall determine $\vartheta$ and the exponent $\nu_c$.

BCC operators have been introduced in CFT to study systems with discontinuous boundary conditions [24]. When inserted on a boundary, these local operators interpolate between the different boundary conditions on either side of the insertion point. They are highest weight states of weight $h$ and all such states may be realized by an appropriate pair of boundary conditions. For the critical Ising model, the BCC operator that takes the boundary condition from $+$ spin to $-$ spin corresponds to the chiral part of the energy operator $\epsilon(z,\bar z)$. This can be understood easily in the representation of the Ising model in terms of a free Majorana fermion field $\psi(z)$ out of which the energy operator is composed, $\epsilon(z,\bar z)=i \psi(z)\bar\psi(\bar z)$ [25]: The Jordan-Wigner transformation shows that the fermion creation and annihilation operators flip locally the spin orientation. 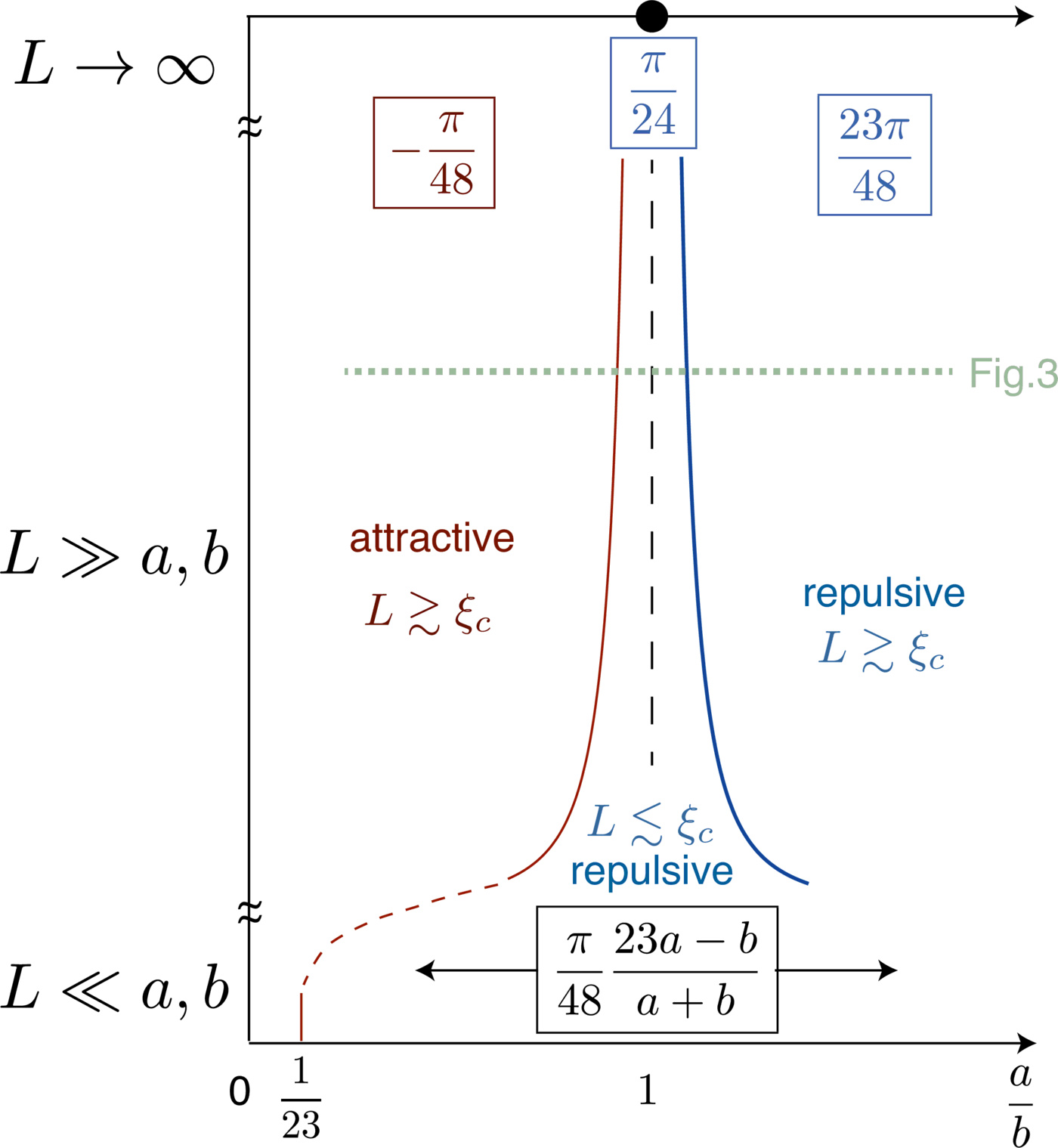 Figure 2 Figure 2. Schematic overview of critical Casimir force amplitudes as function of the strip width $L$ and the ratio $a/b$. For $L\gg a,b$ the solid curves represent the diverging correlation length $\xi_c$. The horizontal dashed line indicates the cut along which the force amplitude is plotted in Fig. 3. Along the red curve the sign of the force changes whereas the blue curve indicates only a change between two universal (repulsive) limits.
Our findings can be summarized by the scheme of Fig. 2. It shows the different scaling regimes and the corresponding asymptotic amplitudes of the Casimir force. At short distance $L\ll a,b$ the amplitude varies continuously across the critical point at $a=b$, with a sign change at $b/a=23$. For $L\gg a,b$ there exist three distinct regions: around $a=b$ appears a region where $L \ll \xi_c$ where the force is repulsive and approaches for asymptotic $L$ the universal amplitude for fixed-free spin boundary conditions. For $a<b$, the force changes sign from attractive to repulsive when $L$ approaches $\xi_c$, corresponding to a stable point. For $a>b$, the force is always repulsive but the amplitude crosses over from $\pi/24$ to $23\pi/48$ under an increase of $L$ beyond $\xi_c$.

Figure 3 Figure 3. Universal scaling function $\Theta(x_s)$ for the critical Casimir force as function of the scaling variable $x_s\sim a-b$.
Our results show the existence of a novel phase transition for the critical Casimir force in the 2D Ising model that is induced by inhomogeneous boundary conditions with a varying ratio of up and down spins. We obtained exact expressions for the universal scaling function of the force. Due to the observed renormalization of boundary conditions, in binary mixtures, ordinary (free spin) boundary conditions can be realized experimentally and “switched” on and off by varying the distance $L$, or an inhomogeneous surface field. The crossover between different universal amplitudes leads to a stable equilibrium point at $L\simeq \xi_c$ for $1/23<a/b<1$. The emergence of the novel phase transition at $a=b$ is related to the relevance of a surface magnetic field $\sim \tau$ at a surface with free spin boundary conditions. This can be seen from the decay of the spin correlations along a single surface, $\langle \sigma_x \sigma_{x'}\rangle \sim |x-x'|^{-\eta_\|}$ with $\eta_{\|} = 1$ for free boundary conditions [15]. Since the surface field contributes an energy $\sim \tau \int dx \sigma_x$, the scaling dimension $y_\tau = 1/\nu_c = 1-\eta_{\|}/2$ which is identical to our findings above. It is interesting to explore these concepts in general spatial dimensions for Ising and XY models, and tri-critical points which have an even richer spectrum of possible boundary conditions.

We thank M. Kardar for many fruitful discussions.